Check out Astronomy Picture of the Day for a new image and accompanying explanation every day from NASA. And don't miss the archive section.
Posted by zaner at 8:04 PM
Email ThisBlogThis!Share to TwitterShare to FacebookShare to Pinterest

Went to my local Apple Store last night for the after-hours, early-release festivities for the much-anticipated OS 10.2 ("Jaguar"). Finding a telling clump of cars in one corner of the parking garage, I entered the closed mall through a nondescript beige door between a dumpster and a Pepsi machine, convinced I’d be one of maybe twenty or thirty geeks to show up for the event (assuming I didn’t get lost along the way).

Much to my surprise, upon emerging from the cinderblock labyrinth behind the stores into the mall proper, I found a long line of people against the walls and darkened storefronts, stretching around a far corner and out of sight. Taking my place at the end of that line, at about 9:50 p.m., the line rapidly grew behind me until it again disappeared around another far corner. After about 20 minutes I heard an Apple employee say he’d counted 600 people so far, and the line continued to grow—I’m guessing at least 1200 people showed up before the night was through.

The store doors opened at 10:20, and they only let a few people in at a time. It was 11:15 when I finally made it inside, and somehow it was worth the wait. I looked around at machines and software for about half an hour, got a copy of Jaguar, and stood in line another 30 minutes for a cashier. When I left, about a quarter after midnight, about 40 people remained in the original line, still waiting to be let in.

Overall, it was extremely gratifying to see so many people turn out for a software release, and to show their support. True believers, I guess. Now comes the hard part—taking the plunge, leaving the security of 9.2.2 behind, and upgrading to OS X.
Posted by zaner at 5:59 PM
Email ThisBlogThis!Share to TwitterShare to FacebookShare to Pinterest

What I'd like to see is a sandwich bag made from one of these roll-up TVs. Take out your sandwich, then flatten out your bag to watch some lunchtime tube.
Posted by zaner at 9:16 PM
Email ThisBlogThis!Share to TwitterShare to FacebookShare to Pinterest

I don't normally look twice at sports photos, but this one really caught my eye: 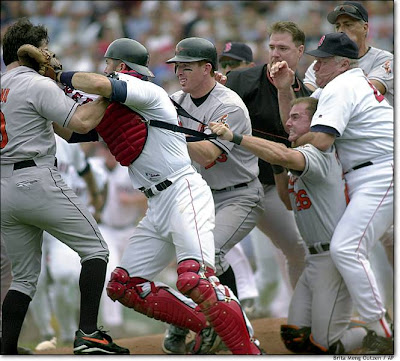 There's as much real-life drama in the dynamic between and among these various faces, reflecting the different parts they're playing in this instantaneous scene, as in any Biblical composition of horrified disciples in a Renaissance painting.

Note, for example, the incredible, direct line of action that extends from the older man's pelvis on the lower right, all the way across the image, through arms and suspenders, to the accosted Oriole's head at the upper left. Even the eyes of the three guys not "directly involved" form another line, pointing right to the sweet spot of the composition. Note also that the image has the same triangular tension as the famous Iwo Jima photo (and resulting sculpture), and more or less the same number of figures.

I think the older man's arm around the neck of the guy on his knees is one of the most interesting stories in the scene—because he's morally balanced somewhere between trying to prevent the fight, and also realizing he's in a position to inflict pain on one of his opponents. To me his dilemma is all the more interesting because he's a pitching coach, in a mature position of authority, past his physical prime (and with the supposed "white hair of wisdom"), yet suddenly possessing the opportunity and justification to choke the life out of a young player.

Finally, notice that the Red Sox catcher's jersey is being pulled right off his torso, despite his "armor" plating. You can read the stretched-out word R E D arcing forward between their forearms, like a verbal metaphor for blood spurting from his chest. The more I look, the more I find in this amazing, everyday shot.
Posted by zaner at 6:37 PM
Email ThisBlogThis!Share to TwitterShare to FacebookShare to Pinterest