Trippy first appearance of McDonaldland on TV.
Posted by zaner at 12:10 AM
Email ThisBlogThis!Share to TwitterShare to FacebookShare to Pinterest

A friend and neighbor was kind enough to leave me his Big Ruckus for a couple of weeks, while he's off adventuring in northern India. I just got back from taking a few laps around the neighborhood. Sure, it's technically just a scooter—and sort of a homely one at that—but for the next fortnight I'll be doing my best to relive law-school days astride my red Yamaha Radian (which looked exactly like the one below). 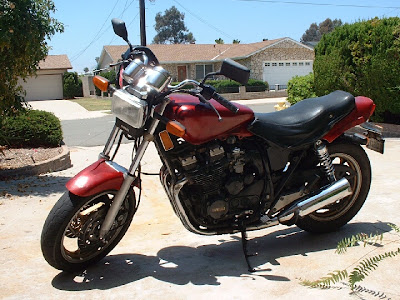 Posted by zaner at 7:30 PM
Email ThisBlogThis!Share to TwitterShare to FacebookShare to Pinterest

The latest release from Apple (how's that for poetic justice?), combined with a handy product from DLO, has made possible an idea I had a year or so ago: my very own Beatles radio station, right in my car.

Some of you may recall the short-lived, much-missed, all-Beatles station in Pilot Point in the mid-1990s, as well as the season-long all-Beatles treat we got from a local station last year. I mourned those sources when they disappeared. They were the only radio stations I listened to in my car other than NPR. Tuning in at any given moment was a guarantee of a great song, picked at random, from my favorite band.

Now, the 1GB (240-song) iPod Shuffle from Apple resurrects the concept, on my own terms. The upgraded capacity of 240 songs is enough room for the complete Beatles canon, plus a few extra favorites. Plug the iPod Shuffle into the DLO TransPod, and plug the DLO TransPod into a 12V socket in your car. Choose a frequency, press play, and you're done.

The TransPod powers (and charges) the iPod Shuffle, and also transmits its output to the vacant FM frequency of your choice on your dashboard radio. Once configured, it can be left alone. In my Ford Explorer, for example, this set-up can be left on perpetually, isn't disturbed when the car itself is turned off or started, any doesn't impose any significant tax on the car's battery overnight (although it's conceivable that the electrical systems in other cars may behave differently in some or all of these respects). I've installed mine in an out-of-the way-12V socket, so as not to unnecessarily clutter my dashboard area—because once it's running, there's no need for it to be within arm's reach.

The interface is seamless. When I press the in-dash radio pre-set button assigned to the frequency I chose for the iPod, it's just as though I'm pressing a button for a normal radio station—my own "iPod station" is there broadcasting for me, playing a randomly-selected Beatles song. I've been running this system for over a week now with no issues.
Posted by zaner at 7:18 PM
Email ThisBlogThis!Share to TwitterShare to FacebookShare to Pinterest

I'm not an Elmore Leonard fan, but I like all 10 of these rules. Especially number 11. (Via 43f)
Posted by zaner at 3:50 PM
Email ThisBlogThis!Share to TwitterShare to FacebookShare to Pinterest

Haven't tried this before—but if this "photo uploading" stuff works, this post should include a picture of the gingerbread house we presented to our realtor this past December: 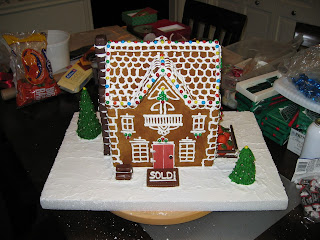 Posted by zaner at 11:44 PM
Email ThisBlogThis!Share to TwitterShare to FacebookShare to Pinterest

Let's try this again. What's three and a half years, between friends?
Posted by zaner at 7:03 PM
Email ThisBlogThis!Share to TwitterShare to FacebookShare to Pinterest
Newer Posts Older Posts Home
Subscribe to: Posts (Atom)